Windows 3.0, a graphical environment, is the third major release of Microsoft Windows, and was released on May 22, 1990. It became the first widely successful version of Windows and a rival to Apple Macintosh and the Commodore Amiga on the graphical user interface (GUI) front. It was followed by Windows 3.1.

Windows 3.0 originated in 1989 when David Weise and Murray Sargent independently decided to develop a protected mode Windows as an experiment. They cobbled together a rough prototype and presented it to company executives, who were impressed enough to approve it as an official project.

Windows 3.0 succeeded Windows 2.1x and included a significantly revamped user interface as well as technical improvements to make better use of the memory management capabilities of Intel’s 80286 and 80386 processors. Text mode programs written for MS-DOS can be run within a window — a feature previously available in a more limited form with Windows/386 2.1 — making the system usable as a crude multitasking base for legacy programs. However, this was of limited use for the home market, where most games and entertainment programs continued to require raw DOS access. 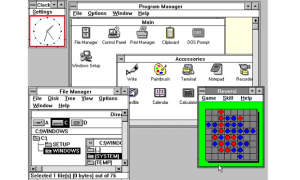