Windows 7 is a personal computer operating system that was produced by Microsoft as part of the Windows NT family of operating systems. It was released to manufacturing on July 22, 2009 and became generally available on October 22, 2009,less than three years after the release of its predecessor, Windows Vista. Windows 7’s server counterpart, Windows Server 2008 R2, was released at the same time.

Windows 7 was primarily intended to be an incremental upgrade to Microsoft Windows, intended to address Windows Vista’s poor critical reception while maintaining hardware and software compatibility. Windows 7 continued improvements on Windows Aero (the user interface introduced in Windows Vista) with the addition of a redesigned taskbar that allows applications to be “pinned” to it, and new window management features. Other new features were added to the operating system, including libraries, the new file sharing system HomeGroup, and support for multitouch input. A new “Action Center” interface was also added to provide an overview of system security and maintenance information, and tweaks were made to the User Account Control system to make it less intrusive. Windows 7 also shipped with updated versions of several stock applications, including Internet Explorer 8, Windows Media Player, and Windows Media Center. 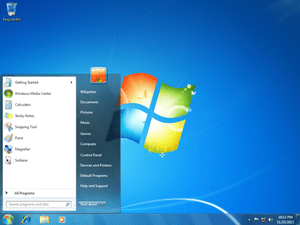