Windows Server 2008 is built from the same code base as Windows Vista; therefore, it shares much of the same architecture and functionality. Since the code base is common, it automatically comes with most of the technical, security, management and administrative features new to Windows Vista such as the rewritten networking stack (native IPv6, native wireless, speed and security improvements); improved image-based installation, deployment and recovery; improved diagnostics, monitoring, event logging and reporting tools; new security features such as BitLocker and ASLR (address space layout randomization); improved Windows Firewall with secure default configuration; .NET Framework 3.0 technologies, specifically Windows Communication Foundation, Microsoft Message Queuing and Windows Workflow Foundation; and the core kernel, memory and file system improvements. Processors and memory devices are modeled as Plug and Play devices, to allow hot-plugging of these devices. This allows the system resources to be partitioned dynamically using Dynamic Hardware Partitioning; each partition has its own memory, processor and I/O host bridge devices independent of other partitions. 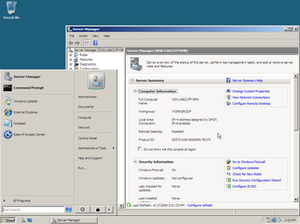